I've spent many holidays here in France, but this was my first Halloween. The holiday is not celebrated here as it is in the US, but the Salon du Chocolat just happened to open to the public on October 31. It is said that there are no coincidences and I believe that is true :) 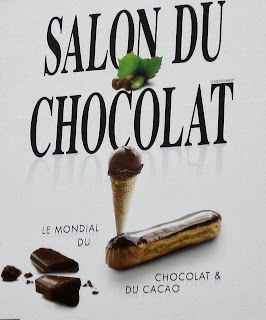 It was crowded as chocolate makers and chocolate lovers filled two floors of the Parc des Expositions at the Porte de Versailles. The 1st floor (2nd floor in US terms) was the chocolate floor with over 150 stands, and the ground floor was the confiserie floor, with confectioners showcasing all things sweet. The 13€ entry fee ($18 USD) covered both floors for one entry and one exit for one day. Discounted tickets were available for younger people, seniors, and those with memberships to stores like FNAC (French version of Best Buy). 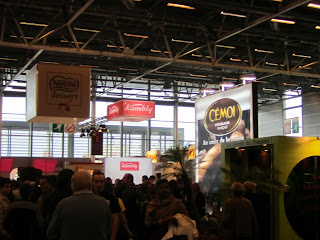 One of the first things I saw was this stand with what looked like Nespresso capsules, but they weren't coffee, they were chocolate! Hautot makes these marvelous chocolates filled with pralines and ganaches; the perfect accompaniments to coffee or for someone with a Nespresso machine. My friend bought several for her Nespresso loving brother since they were having a special buy 3 get one free special during the exposition. At 9,05€ ($13USD) for 6, this was not expensive for luxury chocolates and Hautot himself was behind the counter, ready to answer any questions. 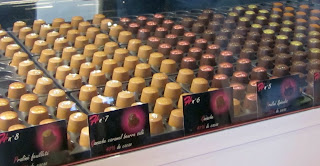 Some big names had big spaces, like Jeff de Bruges, and they were busy with people who wanted to take advantage of specials run during the exposition. 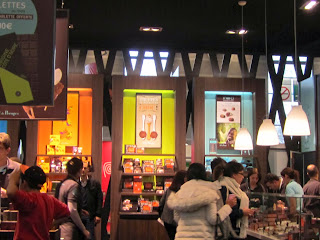 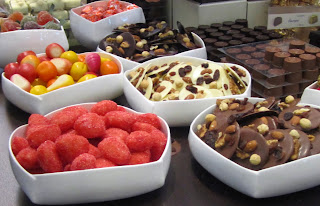 Some retailers sold their wares by weight rather than by the piece.

Some well known chocolatiers like Pierre Marcolini (one of my favorites) had an entire mini museum set up with explanations of the process of making edible chocolate and examples of the raw materials. They also had working machines showing how conching is done, and someone was actually making physical bars in the stand! 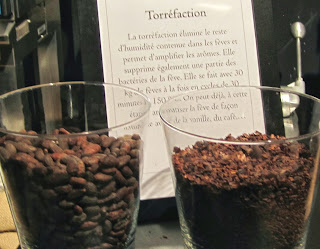 Some artisans like Pascal Legac, offered free samples of whole pieces. Yes, you read that line with the surprise I intended to convey; most did NOT offer free samples, so it is worth noting that a well known chocolatier was offering free tastes! 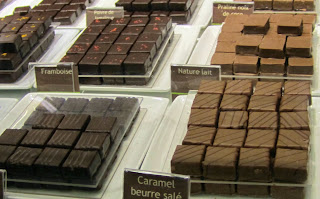 Big companies like Godiva and Leonides had stands packed with people taking advantage of special deals. 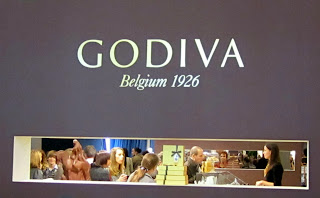 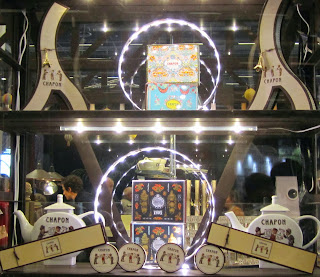 The aroma of Jean-Paul Hévin's hot chocolate was like a drug enticing addicts to his stand from other chocolatiers. 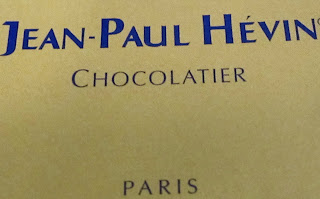 The best drugs are warm, 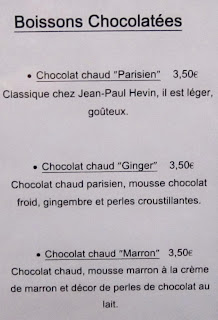 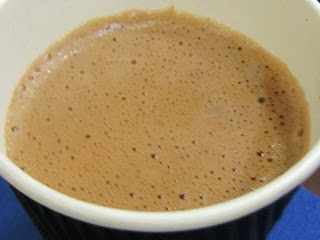 For those who want something warm but thicker than hot chocolate, there were several chocolate fountains offering tastes for a few €uros and your choice of fruit or cake.

Famed Pierre Hermé had both his macarons and his chocolates nearby to tempt connoisseurs even more. 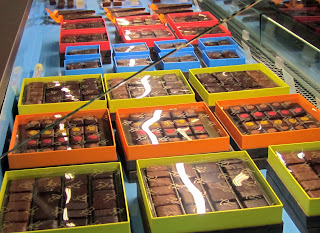 My favorite new discovery was Franck Kestener a MOF and Pastry Champion of the world.

One of the things I appreciate about France is that food stars work in their self named shops and restaurants. Franck was working behind the counter at his booth alongside all the others in the same booth. 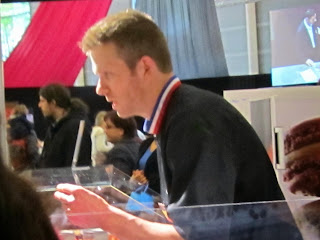 You could buy by the piece or the box. 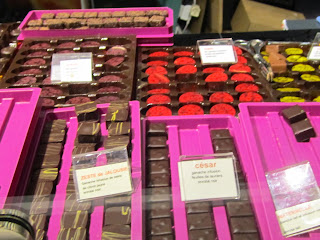 Some pieces were obviously more popular than others. 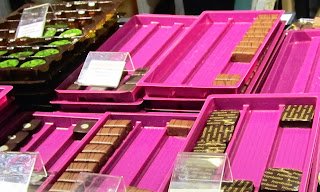 I opted for two boxes for some friends coming from Belgium next week. Starting at 14€ ($20 USD) for a box of 18, these chocolates are a bargain for the quality of the work and chocolate. 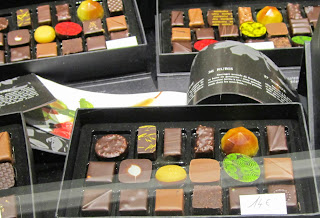 The most impressive display on the chocolate floor was the Leonidas display. 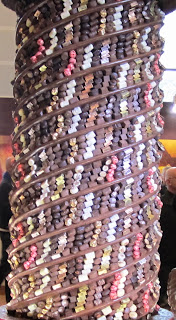 A close up of the sculpture showed that the column is made up of pieces of chocolate! 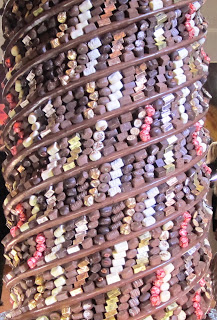 Part 2 will be posted as soon as I fortify myself with some chocolate :)
at 12:37 AM