It's been years since I've baked bread. I used to love giving away challah loaves and baking sandwich loaves, but I stopped when everyone started eliminating carbs and gluten from their meals. It's hard to eat an entire loaf by myself, although I have done that with a few baguettes in France :)

Since I'm cooking and baking more lately, my friends have sent me lots of yeast and organic whole wheat flour, so it was time to revisit breadmaking. Like an old friend, it was a sweet warm reunion!

I used the AllRecipes whole wheat bread recipe which had over 2000 positive reviews. The online recipe allows you to decide how many servings you wish to make, so I halved it to make one bigger loaf (the original recipe makes 3 loaves). I didn't modify it much so here's the pictorial process:

The recipe didn't specify, but I warmed the water to body temperature (like a baby bottle), then dissolved the honey into the water before adding the yeast, stirring until everything was dissolved. 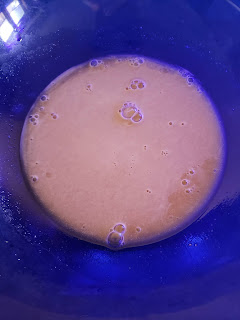 I added the unbleached white flour and stirred with a spoon until mixed. 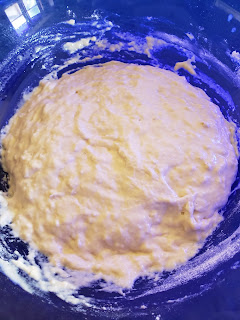 After covering with a towel and letting it rest for 30 minutes, it grew into this: 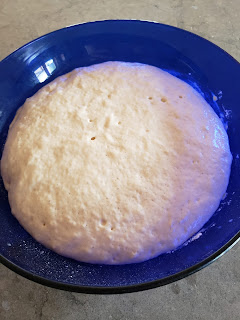 I added the melted butter (I used salted Kerry Gold), honey (I used a local artisan raw rose honey), salt (Guerande fleur de sel), organic wheat flour flour, and kneaded in the bowl adding about another 1 cup of whole wheat flour as I kneaded for about 10-15 minutes until the dough was smooth and elastic. Then I placed it in the buttered baking pan. 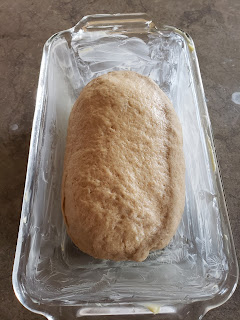 until it rose over the 1" above the baking pan that the recipe suggested. 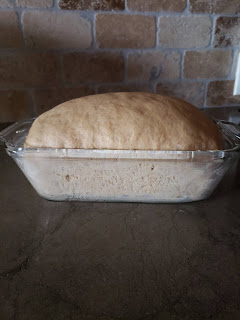 I baked for about 50 minutes, not the 25 or 30 the recipe recommended, at 350, covering the top with foil to prevent over browning. All ovens vary and I had obviously set mine on a rack that was too high and next time I may turn off the convection feature so that it browns more evenly. 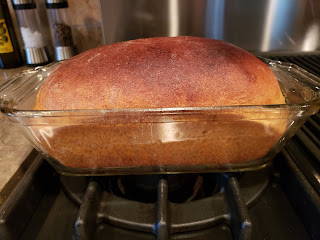 But the loaf turned out to be quite good for a first try after over a decade :) 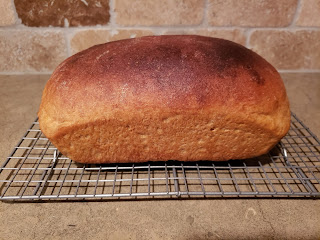 Bit of an air bubble was good nook to nestle some extra butter :) 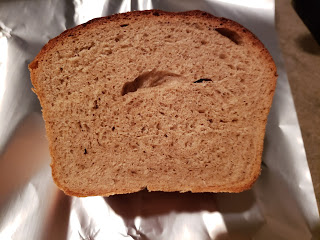 Email ThisBlogThis!Share to TwitterShare to FacebookShare to Pinterest
Labels: recipe