Coming back as a tourist to San Francisco after more than two decades gave meaning to the adage that no matter how things change they remain the same...the Bay Bridge and the Transamerica building are still iconic monuments although crossing the Bay Bridge now is completely automated with either a fastrak pass/tag or they send a bill to the registered owner...I didn't want to face a $25 late fee penalty so I paid it online through their website with the details of my crossing. 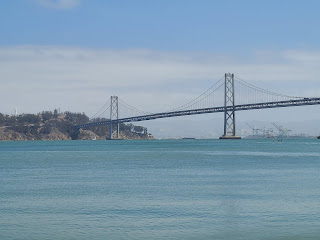 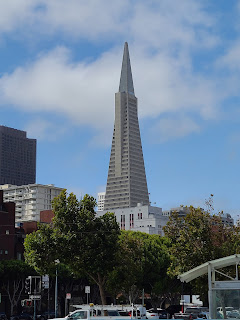 I had plenty of new restaurants to try, and first on my list was a recommendation from a friend who had just been to Sotto Mare and told me it was the best crab cioppino she had ever eaten in her life :) I was very happy that they checked Covid vaccination proof and ID before allowing anyone to eat inside the restaurant. The ones unable to show proof either walked away or ate outside (in SF that means a chilly table even with heat lamps).
I started off with a house salad for $6.50 that looked very simple, but the classic dressing and ripe tomatoes made this a fresh way to start off your feast. 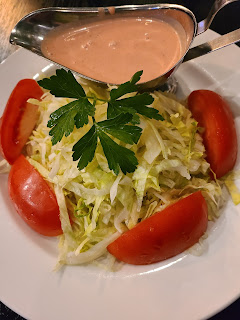 Yes, the crab cioppino lived up to its reputation as the best, for $49.95, it was a cauldron of crab, shrimp, mussels, clams, calamari, and scallops on a bed of penne that could easily be 2 meals if you ate the penne (I did not). 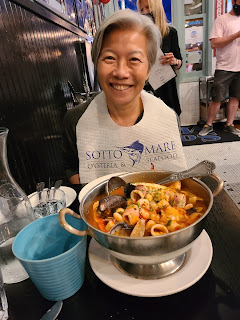 The next day after my appointment at Pier 17, I walked to the Ferry Building Marketplace and got my Blue Bottle oat milk cappucino before exploring all the shops. I ended up at Boulette's Larder at the end of the building facing the Bay Bridge for their fantastic views and food, like their Fattoush salad and one of the best pizzas I've eaten in years! 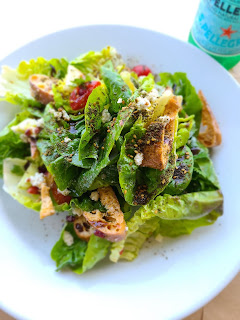 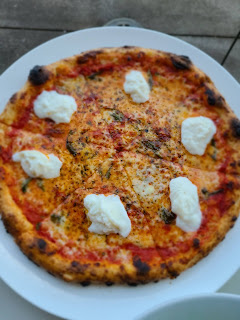 I made reservations at Monsieur Benjamin in Hayes Valley after doing some research on Yelp, and it was as wonderful! I also told several people at Hotel Nikko where I was going for dinner and they all said it was great, so it seems to be a universal consensus that this was a great French restaurant in San Francisco!
Seeing steak tartare on the menu was enough to sell me, but the home made potato chips and the tarragon dressed butter lettuce salad were all as simply French as the main courses. 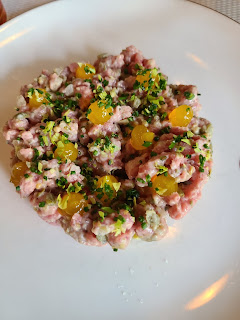 I chose the flounder stuffed with spinach and it could not have been more delicate and perfectly cooked. If anyone you know says they don't like fish, have them taste this flounder dish and see if they have changed their mind! 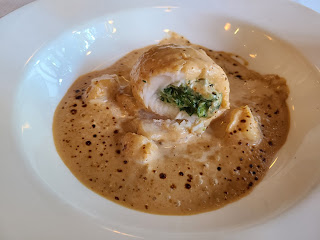 A great ending to a short trip, was an after dinner drink at the Anzu bar in the Hotel Nikko, with the professional and personable bartender John, before taking the elevator upstairs to sleep :)
at 1:00 AM